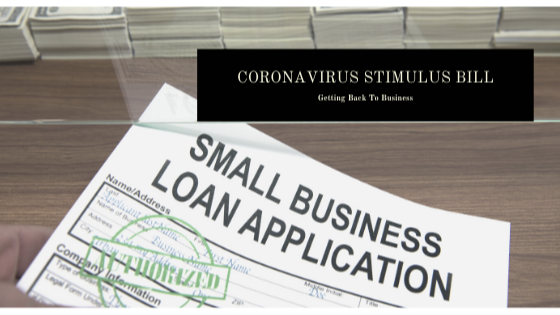 Many of us remember the Financial Crisis of 2008. BIG businesses and banks received billions of dollars of economic relief from the tax payers for an economic crisis that they created. During this period millions of small businesses went under and millions of American workers lost their jobs. Government was not there to help small businesses…that has changed.

The Senate has unanimously approved a $2 trillion dollar stimulus package and this time they included small businesses! The bill is expected to be passes by the House later this week. Here’s what you need to know if you are a small business or individual…
***I intentionally left out the airlines and other big businesses to focus on who makes America work!***

Small Businesses will get help, but how?

The Small Business Administration (SBA) does provide federally backed loans, but if you have been through the process you know how tedious and time consuming the process is. They have not publicly announced how the loans will be given out, when they will be available, or the time frame to pay them back. Some government officials have said there is a possibility that loans will not have to be repaid if businesses don’t layoff workers. That is not official, and we need to wait on the House to pass the bill to see how they are going to treat these loans.

Many are predicting that the banks will help facilitate the loan process. They have the personnel and the knowledge to get the loans out quickly to businesses. If that is the case, businesses should have a commercial bank account setup at a locally or nationally like Bank of America or Wells Fargo.

This is a developing story and more news should be released daily until this crisis is resolved.

Make sure to like our Facebook Page for more information that pertains to American Small Businesses. Please make sure to shop locally and support each other during this economic time.